The construction of the King Vajiravudh statue was initiated by Vajiravudh College Alumni Association in 1932. The association planned to raise funds from donations from Vajiravudh College alumni and erect the late King’s statue at the college. However, when news about the project began to spread, Thai people who loved and respected the late King also began donating and a large fund was raised for the project. The alumni association changed the location for the monument to one that was more accessible to the public, and proposed to the government to take over the project.
The administration of Field Marshal Plaek Phibunsongkhram (Marshal P.) approved the proposal and issued an Announcement of the Prime Minister’s Office regarding the construction of the King Vajiravudh monument on 9 January 1939. Part of the announcement stated:
“The Cabinet unanimously agrees to build a statue of King Vajiravudh who was highly virtuous and performed his duties which historically benefitted the country. The statue will be a memorial that represents the loyalty and gratitude of the Thai people to the late King and it will be a permanent reminder of his achievements.”
“Cabinet unanimously approves the construction of a total of eight statues of late Kings: King Phrommaharaj the Great, King Ram Khamhaeng the Great, King Ramathibodi I (King U-thong), King Borommatrailokkanat, King Naresuan the Great, King Narai the Great, the King of Thonburi, and King Vajiravudh. Each of the statues will be situated in provinces where their glory was made.”
“Since a group of people loyal to King Vajiravudh has already raised funds for the construction of a memorial and Bangkok City Municipality are planning to renovate Lumphini Park, which was built during the reign of King Vajiravudh, Lumphini Park will be a suitable location for the statue of the late King. Therefore the Cabinet has passed a resolution approving construction of the statue of King Vajiravudh.”
The construction was to be completed before an opening ceremony scheduled for 1 January 1940 which was the late King’s birthday. The Prime Minister’s Office had issued guidelines for the statue’s construction and fundraising as follows:
The fundraising committee had been raising donations for the project since 1932. They also held a King Vajiravudh Memorial Fair during 1 – 3 March 1939. In total, they raised more than Bt100,000 which covered the construction cost. The committee consisted of the Fine Arts Department, Department of Municipal Works and the Vajiravudh College Alumni Association, and the construction process was divided into three phases: 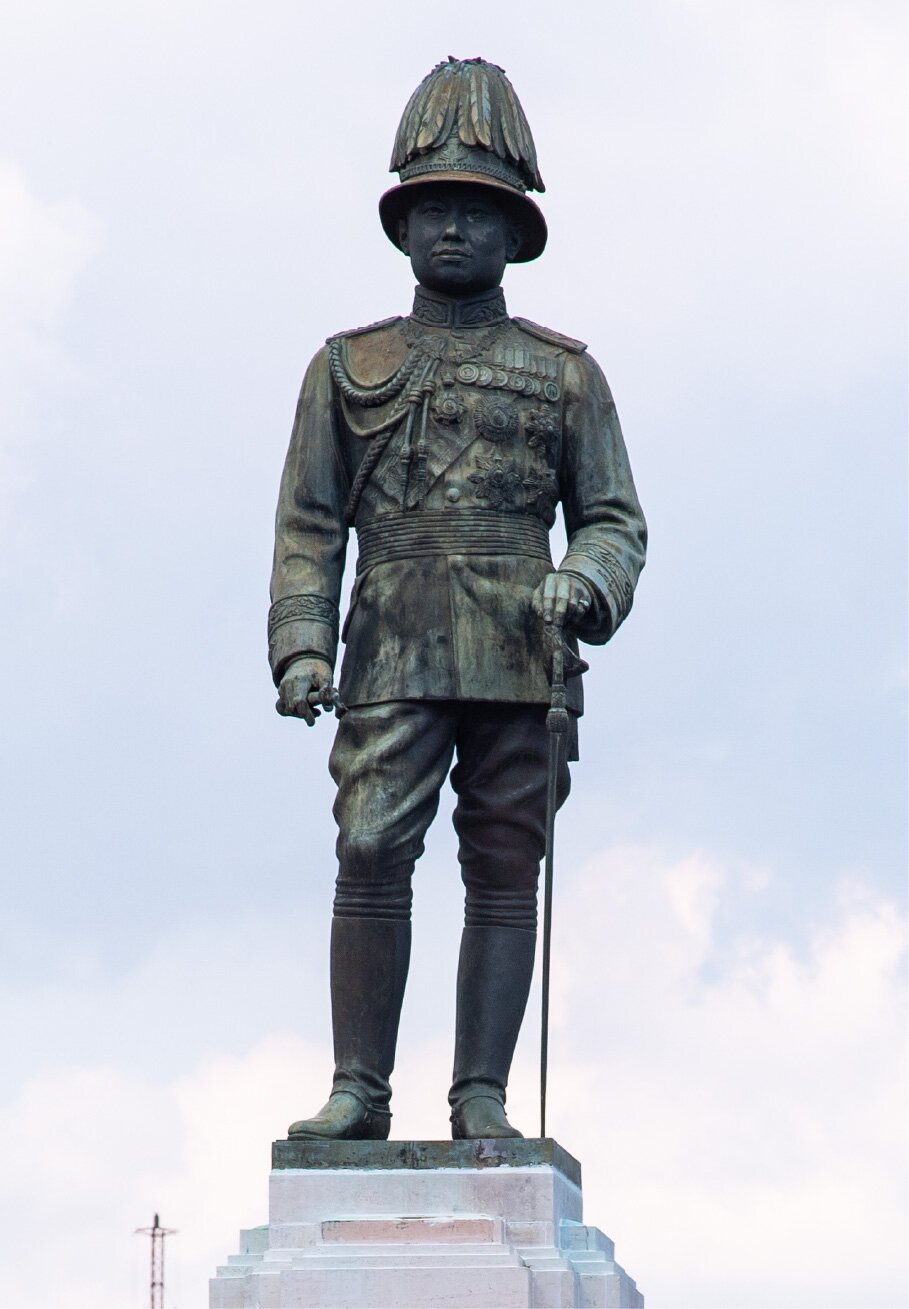 The Fine Arts Department appointed Professor Silpa Bhirasri to be the designer and sculptor of the statue. The statue casting ceremony was held on 1 January 1941at Siwalai Garden in the Grand Palace. The casting began with the head of the statue followed by the torso. The statue casting process was completed on 7 June 1941. This was the first large statue in the Rattanakosin Era which was cast in the country. Previously, the casting of statues was done by sculptors abroad, especially in Europe.
At first, Cabinet wanted to hold an opening ceremony of the King Vajiravudh monument on 24 June 1941. However, the construction of the area surrounding the monument was not completed in time. The opening ceremony was rescheduled to 1 January 1942, the birthday of King Vajiravudh and New Year’s Day. Preparations for the ceremony had already been completed but the event was put on hold because of the Japanese invasion of Thailand on 7 December 1941. Cabinet indefinitely postponed the ceremony until the situation returned to normal. The opening ceremony of the monument was eventually held on 27 March 1942 but no celebration was held as the country was still in a state of war. The opening ceremony was presided over by Prince Aditya Dibabha, Chairman of the Regency Council, on behalf of King Ananda Mahidol.

The statue of King Vajiravudh is two and a half times larger than life size. It features the King in a standing position, wearing the uniform of the General of Wild Tiger Corps. His left hand holds a sword. His right hand holds a sceptre. The statue is mounted on a two-level indented square base with lotus bud-shaped ends. The upper-level of the base is a high narrow square. In each of the four corners of the lower-level of the base is a metal flower tray. The lower-level base has a set of stairs on each side. The metal tablet in front of the monument is inscribed with the late King’s royal emblem while the metal tablet at the back of the base is inscribed with his name. The base is situated on an elevated concrete platform. A few steps lead to the worshipping area in front of the statue. Bangkok City Municipality was responsible for the base construction and the decoration of the surrounding area. 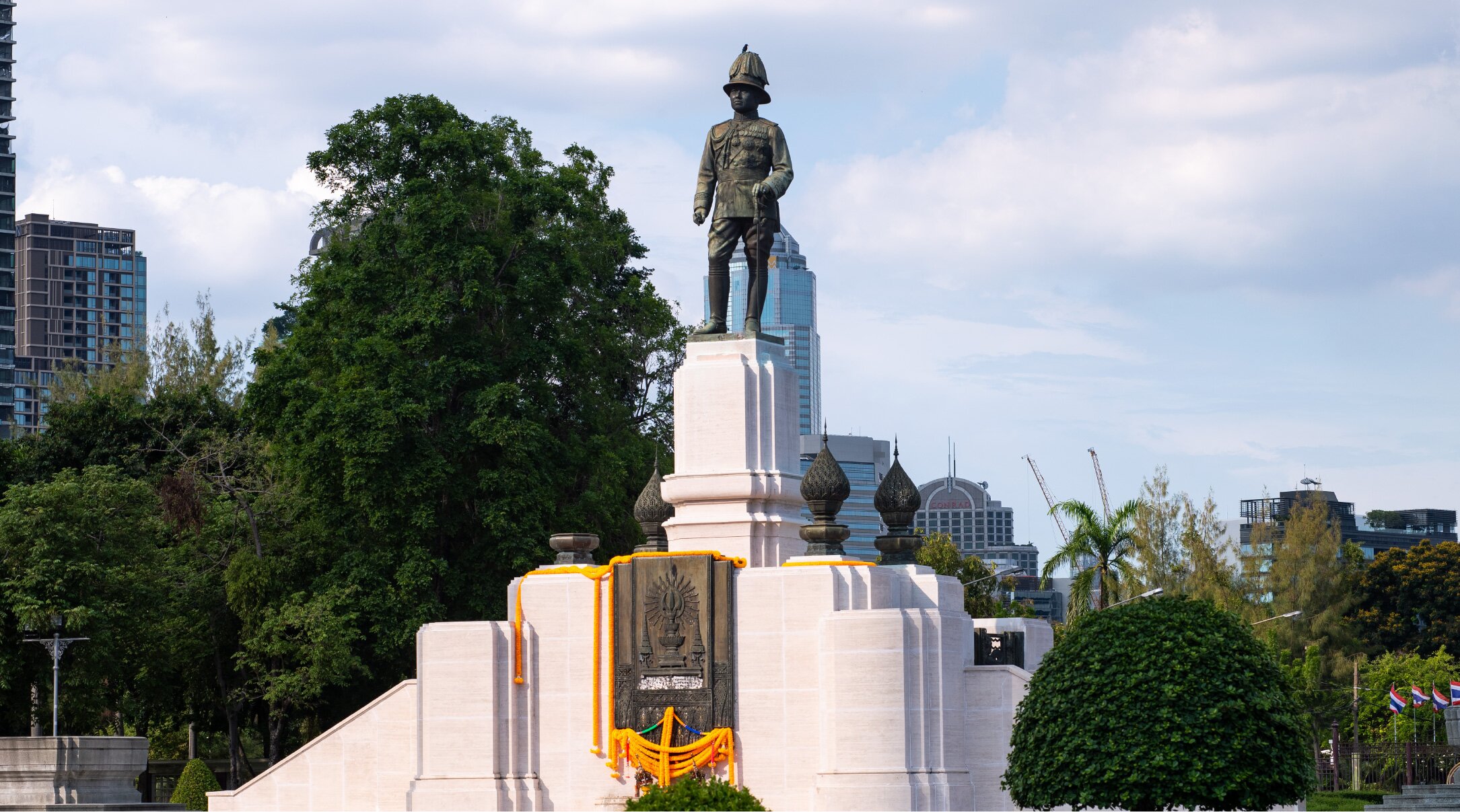 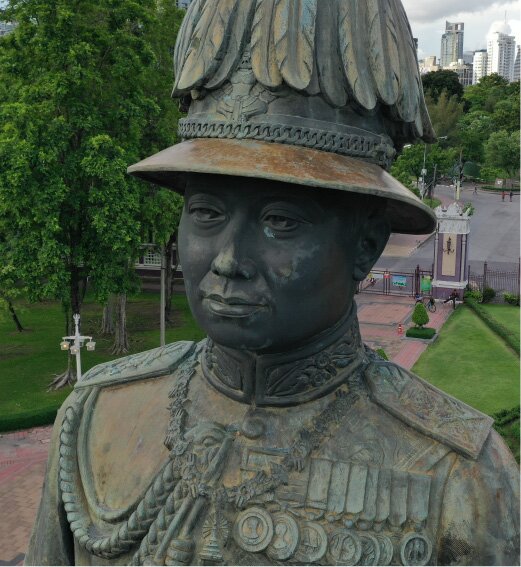 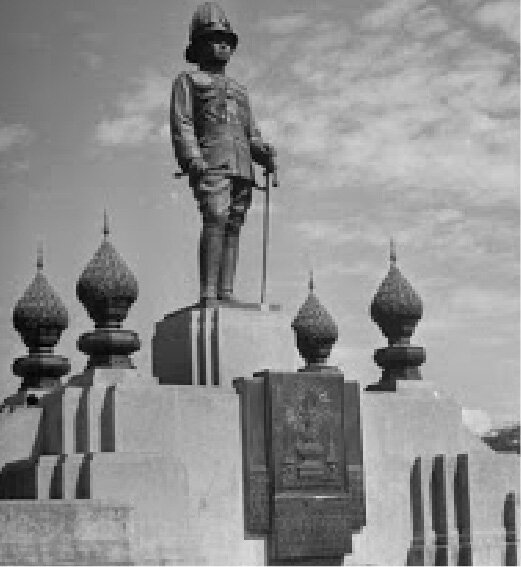 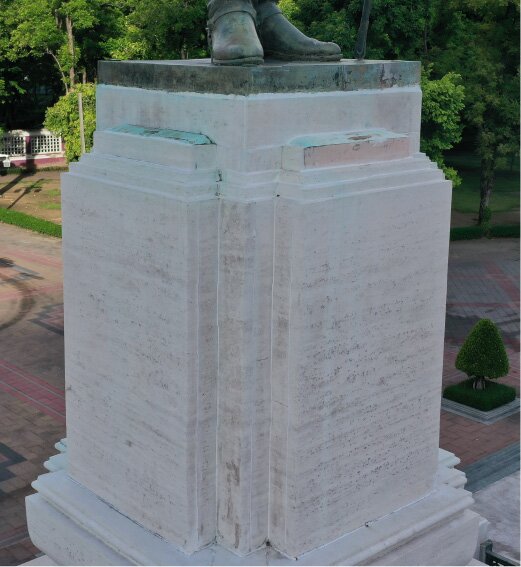 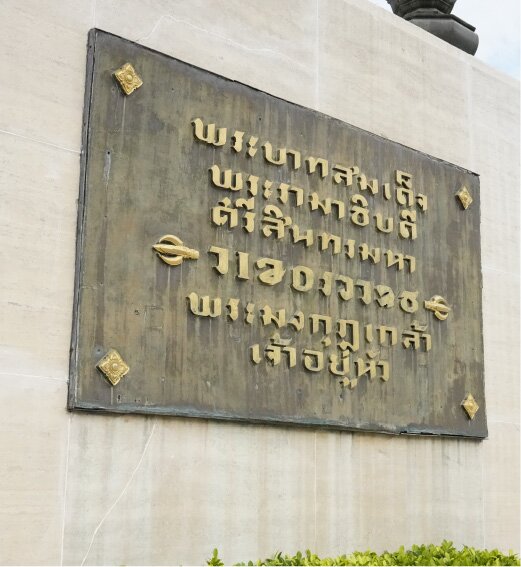 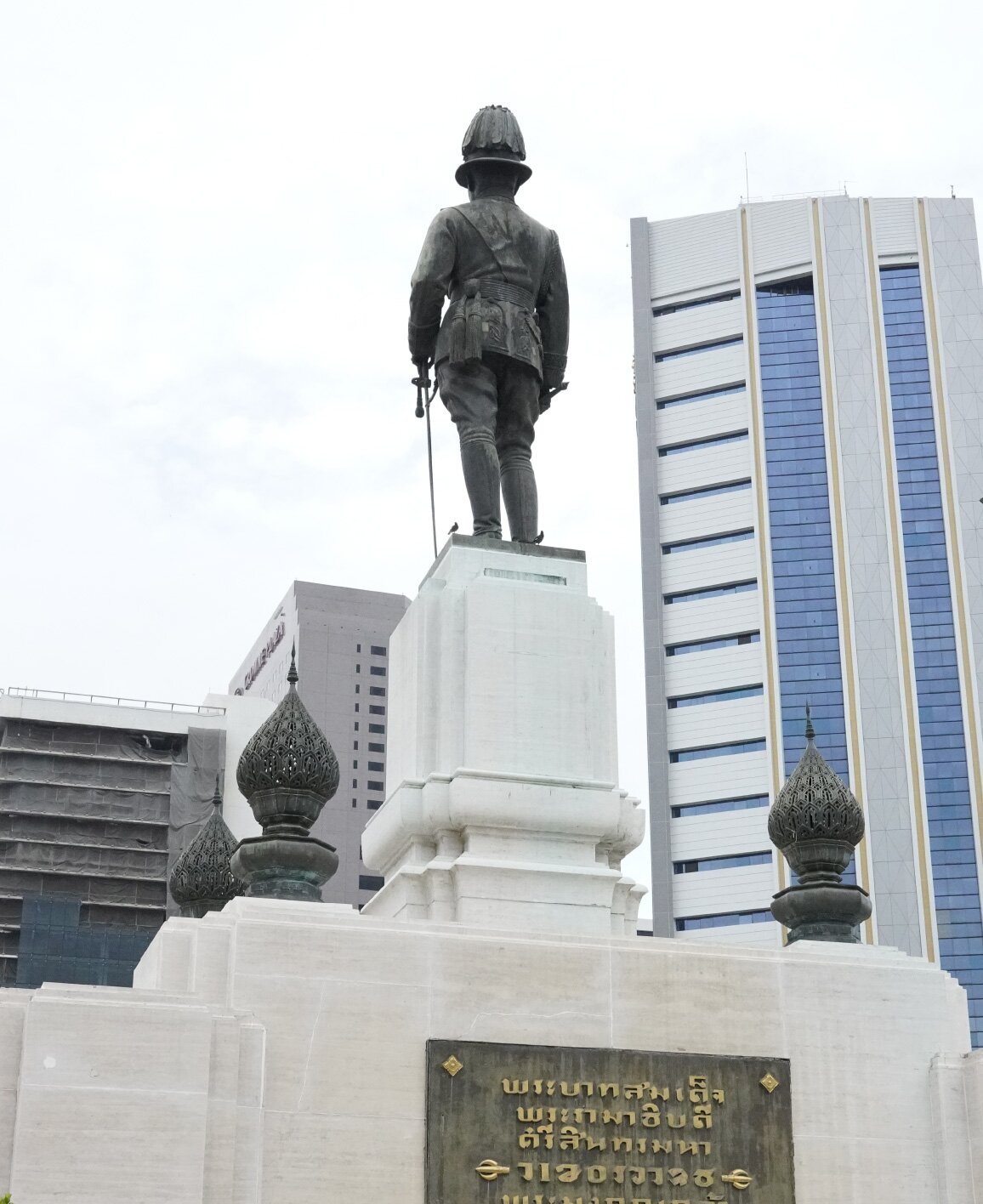 Worachat Meechubot wrote about the expansion of the monument base on the website http://www.vajiravudh.ac.th/OVtoVC/OVtoVC_95.htm “After placing the statue, which is two and half times bigger than the late King, on the base, the committee realised that the base looked too small compared to the grand size of the statue. They agreed that the monument base should be elevated so the statue would look more imposing when it was placed on the base.
However, the base expansion required additional budget. The Vajiravudh College Alumni Association led by Luang Methinaruepakon (Saduak Bunnag) held the King Vajiravudh Memorial Fair, similar to the winter fair held during his reign.
When the association was founded and Luang Methinaruepakon was selected as the inaugural Chairman, the association held the first King Vajiravudh Memorial Fair at Lumphini Park between 25 – 27 November 1940. The proceeds from the fair were used as funds for the expansion of the monument base.”
This information contradicts the information from the Fine Arts Department which stated that the statue casting was completed on 7 June 1941. According to Worachat’s story, it appears that the statue casting was completed before the stated date. In Worachat’s version, the statue was placed on the monument base and the committee realised that the base was too small thus they held the King Vajiravudh Memorial Fair to raise funds for the base expansion. 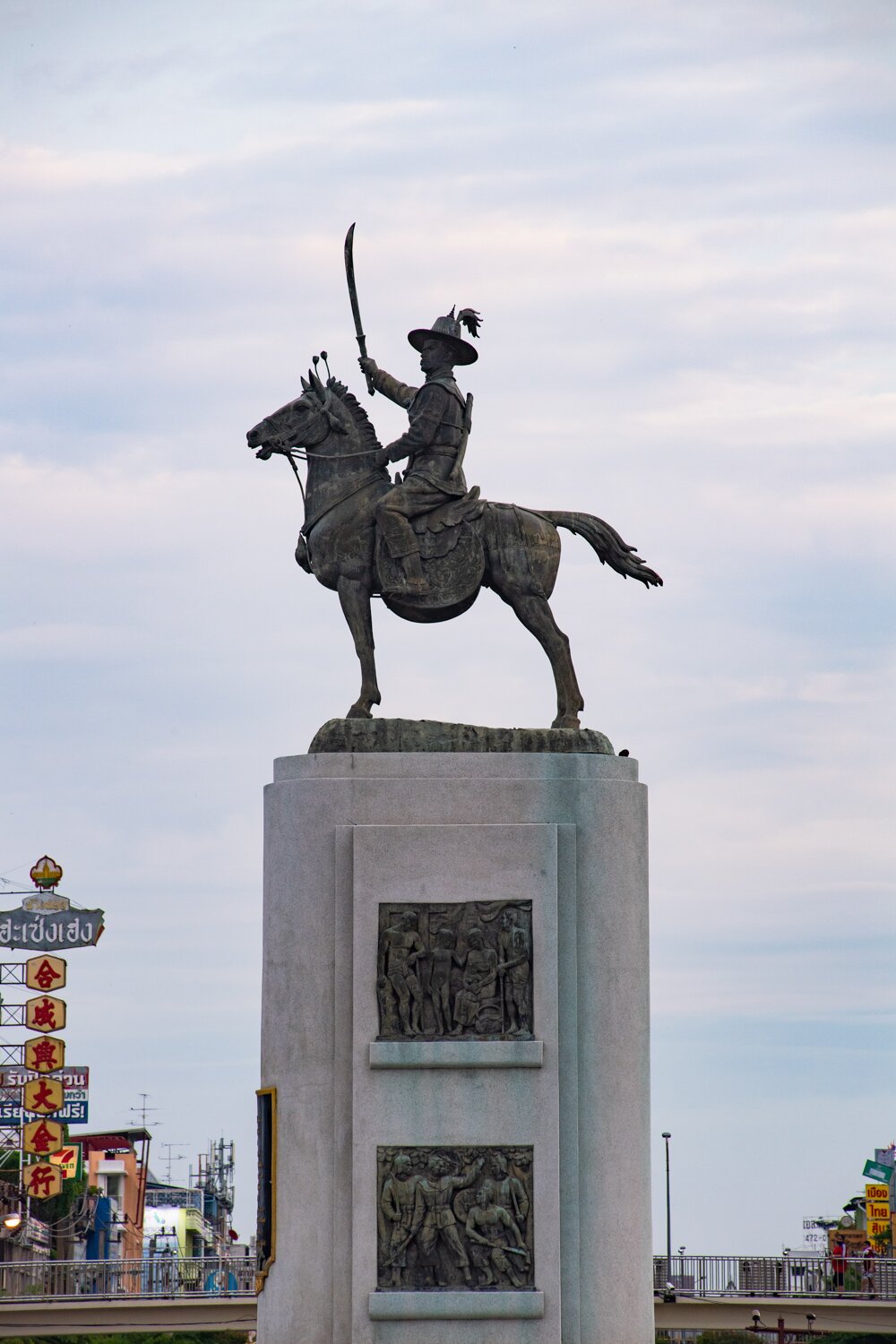 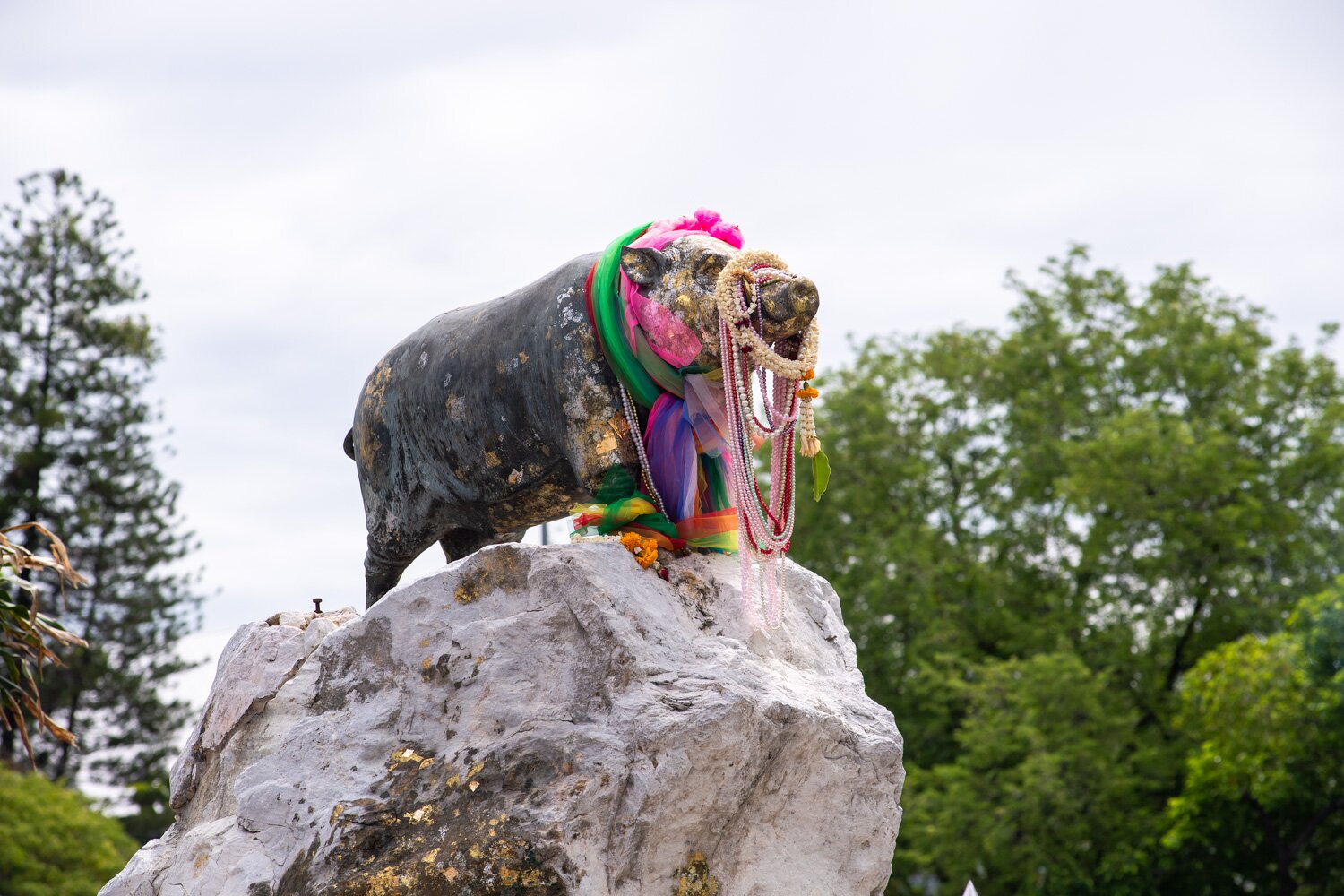 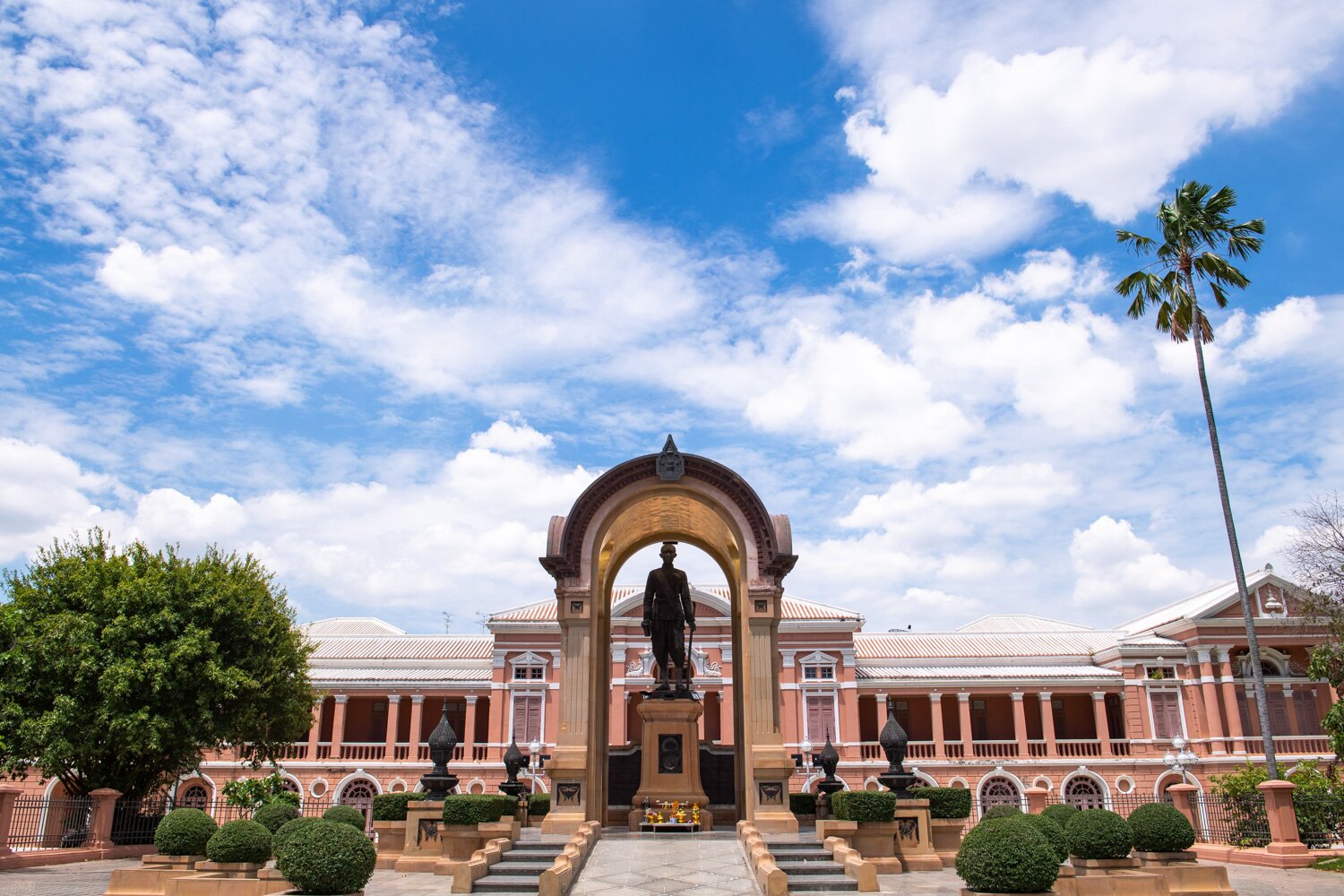